MIDLOTHIAN SOUTH VOTERS HAVE BEEN TREATED TO YET ANOTHER MISLEADING ELECTION COMMUNICATION. 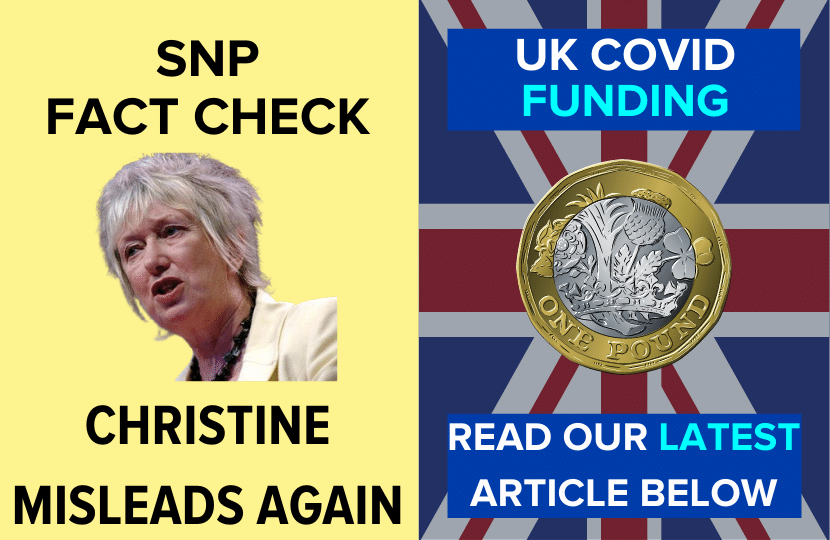 Perhaps it is to be expected that there is no explanation for the unsatisfactory nationalist present- schools attainment down, NHS spending falling relative to England, projects delayed and over budget. There is no mention of the financial reality of a nationalist future, in which UK financial support through the Barnett formula, £20bn and rising, would be spurned.

Mostly, however, there is Christine Grahame's surprisingly inventive, or rather re-inventive, attempt to re-write the past.

Regarding the pandemic: ‘Too often Scotland has been tied to UK decisions’. Would she be thinking of the UK vaccination programme, the most successful of any major Western country? We are at 60% of the population. But she unwisely raises the matter of the EU, which has yet to achieve 25% in most countries. That’s the programme the SNP wanted us to be tied to...

Then there is a breath-taking fabrication about the beginning of the pandemic. ‘The Scottish Government could not lockdown earlier because furlough was not available to it until it was available in England’.

A wee look at the internet by her researchers would have told Grahame that this is just implausible.

The first Scots death occurred on 1st March 2020. Sturgeon indeed acted, but feebly, on 12th March, to ban gatherings of over 500: yet let through the Rangers-Celtic match on 14th March. She could have gone much further, but did not. She did not claim then, as Grahame now does, that Scotland wanted to lockdown earlier; Sturgeon expected a four-nation agreement shortly- not just to do with England as the leaflet claims!

On 16th March the UK Parliament was told of the forthcoming lockdown and on 20th March the furlough scheme, the most generous in Western Europe, was announced by the Chancellor Rishi Sunak, and backdated to 1st March. So there were 19 days between the first death in Scotland and our vital (and much applauded) job-saving measures.

Compare that, if you will, and the SNP often does, to independent Norway. First death, 26th February; seventeen days later a furlough scheme was announced. So in practice the UK decision taking, from a Scottish perspective, was about the same as nimble Norway.

Perhaps Scotland would have been good at the bureaucratic bit, as required to set up furlough payments in super-speedy fashion?

Just ask any farmers about speed, those who had to wait months and years for the EU Common Agricultural policy pay outs, administered here. Or there are the 2018 package of devolved social benefits, where the administration was handed back to the UK by the Scottish Government, because it was too difficult to set up independent systems. We are now offered 2024 by the SNP as the first practical date for local administration, crazy for a party wanting full ‘independence’ (by which they mean separation) long before that.

So why did it not only permit the 26th/27th February NIKE conference in Edinburgh's Carlton Hotel, but suppressed the knowledge that this indoor event had resulted in 70 infections? And what about the decision, definitely made in Scotland, to transfer 338 hospital patients known to be positive for COVID into care homes? At last, this month, Health Minister Jeane Freeman, her tongue loosened, one imagines, because she is not standing again for the Scottish Parliament, finally admitted these glaring errors. But not Christine Grahame!

Of course Grahame does not mention the fact that the central UK Government has paid up to £10bn of Covid relief measures for Scotland. Furthermore, she wants her voters to be ignorant of the Barnett formula which gives Scotland the strength to face the future.

Under the SNP: an unsatisfactory present; a perilous future. And a past that's not what it used to be.