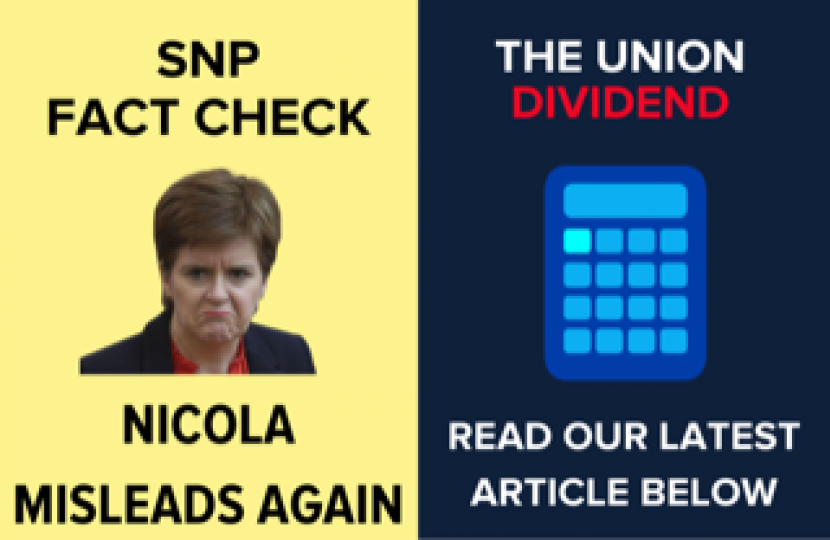 In her election interview with Robert Peston on 21st April, Nicola Sturgeon claimed that the money Scotland receives from the UK Treasury, in particular through the ‘Barnett Formula’, comes either (in her words) ‘from the taxes that Scotland pays’ or ‘Scotland’s share of the UK’s borrowing’. Scotland, in other words, does not receive any subsidy from central government and, by implication, would not lose out if funding from London suddenly dried up (say, through independence).

This is a claim that Ms Sturgeon and her SNP colleagues have made time and time again, and it is understandable why they would, since the fears of the financial consequences of separation probably convinced a large number of Scots to back the Union in the 2014 referendum. But it is false, and Nationalists have to be held to account for it.

According to a recent independent report for the fiscal year 2019/20, Scotland’s public spending per head is £14,830. Across the rest of the United Kingdom, only Northern Ireland is higher; per head Scots have more public spending than the Welsh or the inhabitants of any region in England.

Given this fact, the only way that Ms Sturgeon’s ‘no subsidy’ claim could be true would be if Scots also generated much more tax revenue per head than their English and Welsh neighbours. If we did, it would be understandable if we got more public spending back. But this is not the case.

According to the same report, while Scots generated 8% of total UK tax revenue, they receive back 9.2% of total UK public sector spending: proportionally, we get much more out than we pay in. In effect, Scotland gets a subsidy from London, and this ‘Union dividend’ is all the more important because Scots don’t even generate the UK-average per head tax revenue. In fact, we fall slightly below this, generating 8% of total tax take despite having 8.2% of total population.

We live in extraordinary times, and across the UK the government has, in the Prime Minister’s words, ‘put its arms around’ every single worker and family, through the Furlough Scheme and other means of government support. Scotland has benefitted from this, receiving more than £10bn of Covid support from London. As the world returns to normal, these measures will cease but the Union dividend will continue to flow from London to Scotland, ensuring that we have a better-funded public sector than our own tax revenues would allow.

So the next time an SNP activist tries to convince you of the economic benefits of breaking up the UK, remind them of that.